Lucid Motors was founded in 2007, based in Newark, with a different name and mission. The company, called Atieva at the time, focused on developing electric car battery technology. It then shifted to producing electric cars and changed its name to Lucid in 2016. Lucid Motors chose a 500-acre property in Casa Grande, Arizona for the factory. Its Vehicle Models include The Lucid Air, Air Touring, Air Grand Touring, Air Dream Edition. The earliest edition will be Air Dream Edition, which is expected in Spring 2021 at a pricing starting from $161,600 USD. The latest is Air, which is expected in early 2022, at a pricing starting from $69,900 USD. In February 2021, Lucid Motors announced a deal valued at $11.75 billion to merge with Churchill Capital Corp IV (ticker CCIV), a publicly traded special-purpose acquisition company.

Who is the Executive Team?

Some of Lucid’s 500 employees as of 2016 had previously worked at other car companies such as Tesla and Mazda, including Peter Rawlinson, the former VP of Engineering at Tesla, and Derek Jenkins, the former Head of Design at Mazda North America Operations. The company has seen investments from Tsing Capital, Mitsui, Venrock, JAFCO, and others,providing an estimated US$131 million by 2016. Venrock, Mitsui, and JAFCO are still current investors in the company.

Lucid Motors received 1 billion dollar in funding from Saudi Arabia’s sovereign wealth fund, With this fund, Saudi Arabia now owns more than half of Lucid Motors. Saudi Public Investment Fund (PIF). The investment financed Lucid Motor’s 2020 commercial launch of its first electric vehicle, the Lucid Air. Under the agreement, Lucid will use the funding to complete engineering development and testing of the Lucid Air; construct its factory in Casa Grande, Arizona; begin the global rollout of its retail strategy starting in North America; and enter production for the Lucid Air.

The Public Investment Fund was originally established in 1971 to facilitate the development of the Saudi Arabian national economy. In 1974, PIF was mandated to hold equity positions in join-stock ventures within its domestic economy.

The ​Public Investment Fund seeks to become one of the largest sovereign wealth funds in the world. To achieve this, the Fund is building a world-class, diversified portfolio through investments in attractive, long-term opportunities at both the domestic and international level.

The first model from startup Lucid Motors boasts an aerodynamic shape that’s functional and fashionable. Its spacious and upscale cabin is covered by a glassy canopy that should help it live up to its atmospheric name.

The company says that owners should be able to resupply 300 miles of range in 20 minutes at a fast-charging station.

The Air will be loaded with 32 sensors, a driver-monitoring system and an Ethernet-based architecture all for its advanced driver assistance system, which is designed to support hands-free driving on highways.

Inside, a 34-inch curved glass 5K display sits in front of the driver, and appears to float above the dashboard. Another center touchscreen is retractable, revealing more storage. Meanwhile, a few physical controls remain on the steering wheel and just above the center screen to control volume and activate the ADAS and Amazon Alexa, which is integrated into the vehicle. Below that center touchscreen and moving to the console is a spot for inductive charging, cup holders and USB-C ports, along with additional storage.

Owners of the Air will have an app that will control and communicate with the car, such as locking and unlocking the vehicle. But it will also be equipped with facial recognition that confirms the identity of the owner.

Lucid is collaborating with Amazon to build in compatibility with Amazon’s voice assistant Alexa, allowing drivers to use the voice assistant for navigation, phone calls, media streaming, smart home control and more while driving.

Lucid unveiled an electric SUV concept in September 2020 called Project Gravity, but provided only a brief “glimpse of the future” and short video segmen. 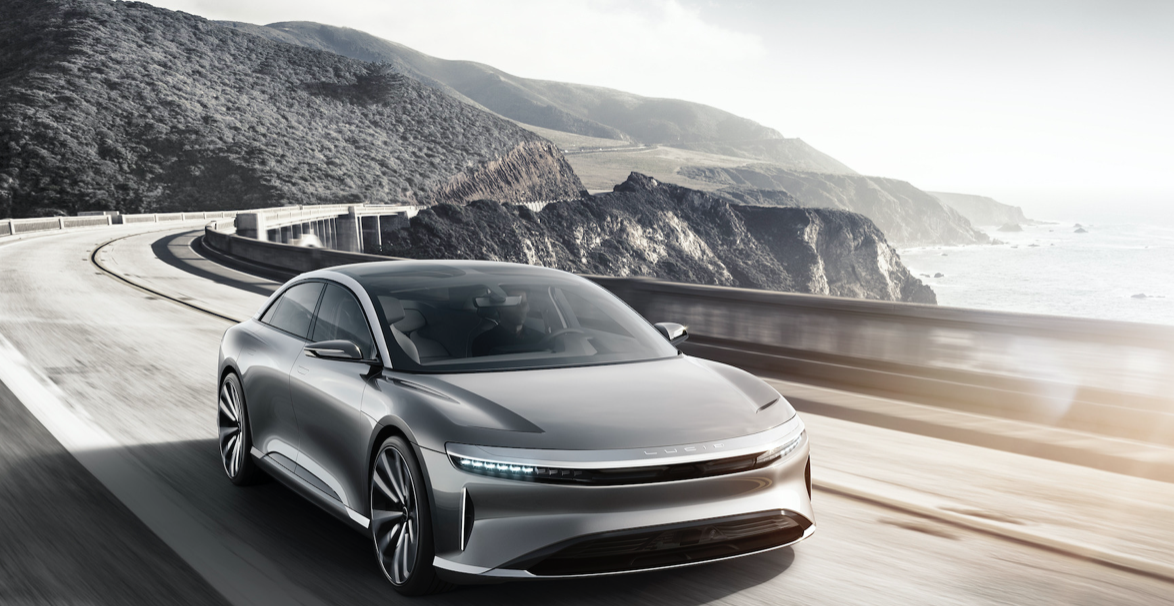 Tesla has established itself as the preeminent EV automaker, Lucid Motors is currently best known for supplying batteries to Formula E race cars. Lucid looks to challenge luxury alternatives such as the Model S and Porsche Taycan with its all-new 2021 Air sedan.

“Tesla (Model S) is premium, it’s beautifully engineered and it’s super disruptive, but it is not an S Class Mercedes replacement in the EV space and that’s what we’re offering,” Rawlinson said in a recent interview

With up to 517 miles of EPA-estimated all-electric range and as much as 1080 horsepower, the 2021 Lucid Air aspires to be much more than a Tesla rip-off.

Lucid began as Atieva, a company founded by former Tesla VP and board member Bernard Tse and entrepreneur Sam Weng that focused on developing electric car battery technology. That early work would be critically important for the Lucid Motors of today because of the early research, development and eventual progress in the components and overall electric architecture, Rawlinson told TechCrunch. Atieva would go on to become the battery supplier to Formula E, which would also help the company make gains on the design and performance.

Lucid mainly developed battery technology in its early years, but began development of its first car in 2014.

Lucid has built its batteries to work across its electric vehicle and energy storage products, including in second-life uses, Chief Engineer Eric Bach told TechCrunch.

If you would like to learn more about additional business consulting and capital markets services:

As a financial services firm Lions Financial focuses on helping companies in the automotive and trucking industry through capital markets financing and business consulting engagements. With the growth of the automotive industry, it is important to understand the business models of the companies entering the marketplace. We have put together a Market Research overview of the Founders, Executive Board, and investors of Lucid Motors. Lucid Motors originally focused on building electric vehicle batteries and powertrains for other vehicle manufacturers and has grown with the intent to develop an all-electric, high-performance luxury vehicle.

The sources we use for this information include:

Overview Lincoln Financial Group is the marketing name for Lincoln National Corporation and its subsidiary companies, which is a Fortune 250 American holding company operating

Analysis of Hydrogen for the Automotive Industry

What is the Hydrogen Technology that is used for Cars? Hydrogen vehicles use fuel cell electricity using a fuel cell-powered by hydrogen, rather than drawing

Overview Sea Limited(LTD) is a consumer internet company. The company has an integrated platform through several divisions, Garena in digital entertainment, Shopee in e-commerce, and

What are the Legal Conditions and Provisions of PPP Loans for Business Owners to be aware of?